“I’ve Been as Lucky as I’ve Been Unlucky:” Cynthia’s Story

“I would do anything for Esther. She’s the epitome of goodness.” Like many Gokhale Method students local to the Bay Area, Cynthia deeply values her personal relationship with Esther. Cynthia is 72 years old and a native Californian. Her husband, Charlie, is also a native Californian, and they love their home state.

Cynthia has always valued being in good shape and pursuing outdoor activities. She started backpacking after she got her undergraduate degree in Spanish. She continued backpacking while teaching Spanish, and during a backpacking trip in the Canadian Rockies, she realized she actually wanted to be a geologist. She had with her a book on local geology, and says that “the exposure of the sedimentary, folded, metamorphosed strata in the Rockies would make anyone into a geologist.” She returned to school for a geology degree and began working at the United States Geological Survey (USGS). 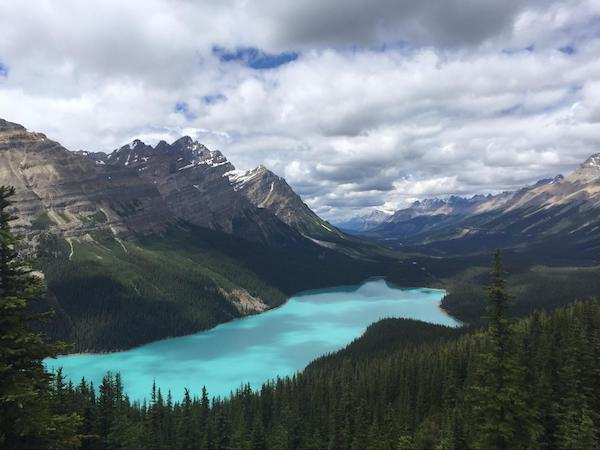 As a young geologist in the mid-1970s, Cynthia spent long summers over 3 years doing fieldwork in remote locations in the Alaskan wilderness. She backpacked for recreation in California and also for fieldwork in Alaska with her boss: she was very strong, especially in her legs. 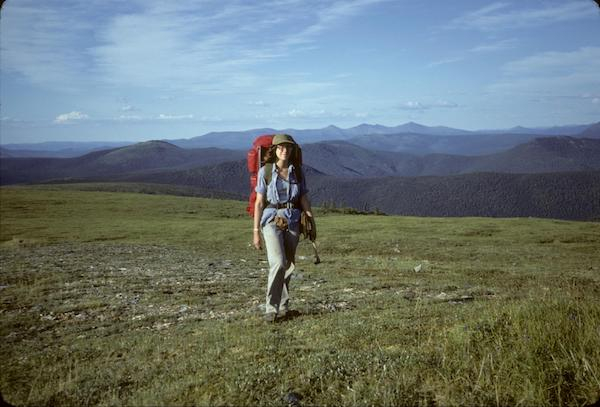 Earlier in her life, posture had been something Cynthia’s parents always stressed. She remembers her dad telling her to imagine a wire lifting her chest skyward. After working with Esther, she realized her lower back was swayed, probably as a result of sticking her chest out and pulling her shoulders back for so many years.

Cynthia first heard about Esther from her husband Charlie, who was referred to Esther for lower back pain by his physician. Cynthia decided to begin working with Esther for problems related to a severe accident, in which she was badly mauled by a black bear.

A sudden transition and new priorities
The harrowing attack occurred during geological fieldwork in the Alaskan wilderness, and left Cynthia with only 6 inches of her left arm below the shoulder. Nothing remained of her right arm. Thankfully, Cynthia was able to survive and heal from the bear attack and various follow-up operations, including amputations and debriding.

The bear attack meant that Cynthia had to learn a whole new relationship with her body. She needed different physical strengths than those she had before the accident. She initially had physical therapy for limberness and flexibility and subsequently developed a regimen of daily strengthening and stretching exercises. Cynthia thinks her problems with her lower back — which has inoperable disc problems, including degeneration and stenosis — and neck are a result of having lost her arms and having to wear artificial arms, which together weigh seven pounds and are connected by several straps behind her neck.

Another of Cynthia’s particular challenges derives from overuse of the parts of her body used to compensate for not having arms. She does a lot with her feet: for example, to open a door, she will often do a high kick and use her foot to turn the doorknob. While her husband was off doing his own fieldwork over nearly 40 summers, she used a high, raised barstool and leaned back to use her feet for tasks like cutting up her food and doing dishes. This contributed to her back strain. 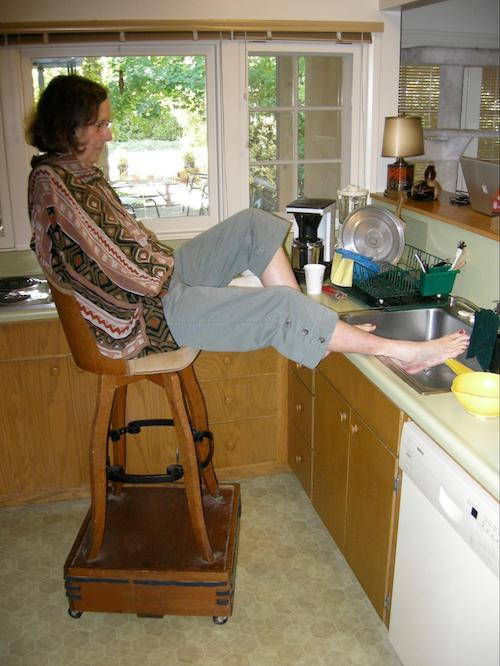 For years, Cynthia used a modified barstool to reach the kitchen counter and used her feet for a variety of daily tasks. This resulted in a tucked pelvis. Image supplied. 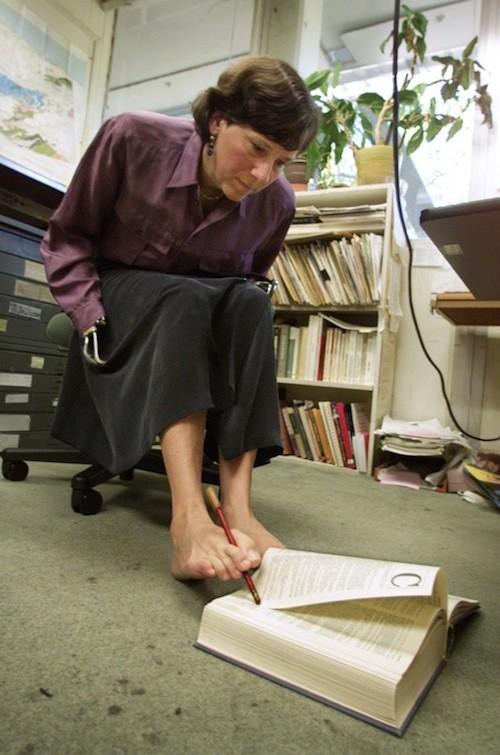 Cynthia uses her feet and a pencil eraser to turn pages in a book too heavy to be held by her artificial arms. Image supplied.

A particularly unique aspect of Cynthia’s posture is asymmetry in her glutes, which results from having to frequently raise her right leg to do things in daily life. Although she was left-handed before her accident, it turns out she is strongly right-footed. This led to a pattern of frequently tucking her left buttock in order to lift her right leg higher.

Before the accident, Cynthia played Latin American and flamenco guitar, but the harmonica turned out to be the only instrument she could play without arms. She grew up loving the jazz standards her multi-instrumentalist dad introduced her to, and she now plays these same tunes with the band she manages and performs with. “It’s a real joy” to play the harmonica. Playing harmonica also contributes to her posture situation: while playing, Cynthia must frequently move her head side to side and up and down (for sharps and flats) to play her modified hands-free chromatic 12-hole harmonica. This translates to lots of neck work while playing, and can lead to strain. 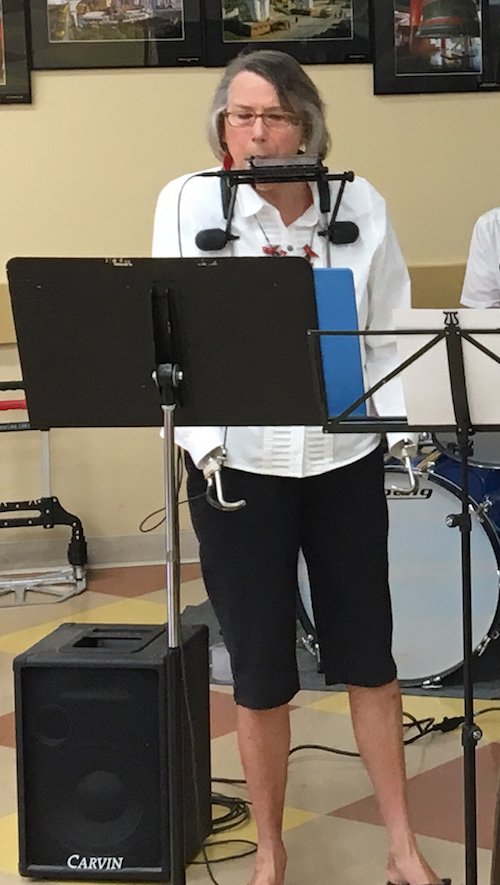 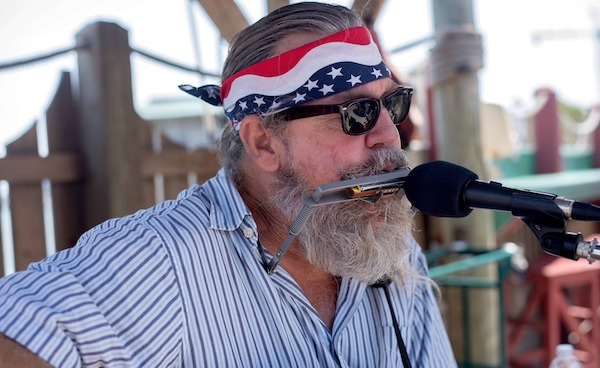 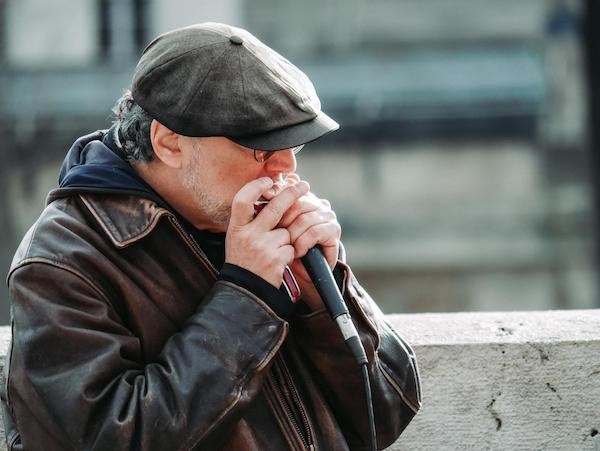 Playing harmonica without posture instruction can lead to neck strain for any musician. Image courtesy Matt Seymour on Unsplash.

Support for her unique physiological needs is what Cynthia has been working on with Esther. Although their acquaintance stretches back decades, within the past year, Cynthia signed up for a series of six private lessons with Esther to focus on her particular problems.

The most obvious changes Cynthia has seen since beginning the Gokhale Method are improvements to her bodily symmetry, strength, and functionality. Cynthia is happy to report that she has “completely corrected” her gluteal asymmetry with glidewalking and strengthening exercises. Her private lessons and SpineTracker™have taught her how to anchor her ribs and to leave her imaginary tail behind her. Those techniques, along with hip-hinging, stacksitting, and tallstanding, have helped reduce her overuse injuries. With the addition of swimming and hiking, also done with good form, she keeps her back and body strong. Though her structural problems are such that she's not totally free of pain, it is definitely reduced and less frequent.

Multi-faceted woman
Cynthia is now a geologist emerita volunteer at the USGS. She hasn’t done any field work since 2010, but has a large number of geological samples from many years of collecting, to work with and to write research papers on. She continues to collaborate with other geologists in the US, especially in Alaska, and in Canada.

Along with playing harmonica, hiking remains one of Cynthia’s longtime passions. She recently traveled with her husband to view the famed California wildflower blooms. She’s now reconnected with friends from elementary and high school — some of whom she’s known since kindergarten — to do a weekly hike. Hiking and walking are very important to Cynthia’s well-being. So is swimming for nearly an hour at a time, three times a week. Both swimming and hiking are done without her artificial arms on — "back to my core body," as she puts it. Both activities are opportunities for her to use Gokhale Method techniques to stretch, which really keeps her back from hurting. 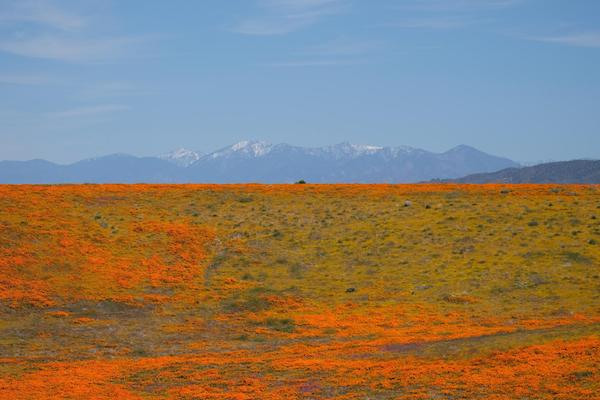 Without her “unbelievably fantastic husband,” Cynthia insists she couldn’t do any of these things. He helps her out of the pool, pulling her up by what remains of her left arm, and is her roadie for harmonica gigs, carrying her microphone, amplifier, and music stand and keeps her harmonica clean and functioning. She says, “I’m as lucky as I was unlucky…to have found my perfect soul mate.” Other than having lost her arms and the typical discomforts she has from getting older, “everything else couldn’t be better” in her life. 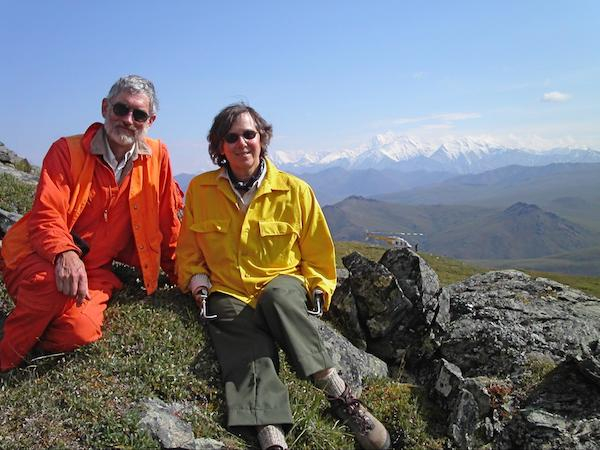 Increased functionality and reduced pain for young and old alike
In Cynthia’s opinion, the most helpful thing about Gokhale Method techniques is their daily utility in life. She feels strongly that if younger people can learn the Gokhale Method “before they’re old and hurting,” it will function as preventative care to help them avoid degeneration as they age. She plans to introduce her son and daughter-in-law to the Gokhale Method by taking a DVD copy of Back Pain: The Primal Posture Solution with her when she goes to visit them in Pittsburgh this summer. Cynthia wants to help them keep from falling prey to the posture problems so common in today’s twenty- and thirty-somethings: the habitually slouched and tucked posture of the laptop-and-cell-phone generation.

She also considers it “so important” to be able to counteract the unhealthy ergonomic design found all around us: backward-tilted car seats, forward-jutting headrests, airline seats, auditorium seats, and on and on. All of these, in Cynthia’s words, are “fighting against good posture,” and she wishes Esther could have been consulted during the design stage. Thankfully, for now, the Gokhale Method is available to help Cynthia — and all of us — navigate a human-made world not designed for healthful posture.

Tags:
bear attack
tucked pelvis
Gokhale Method
musical instruments
accident
amputee
Like what you read and want more? Sign up for our newsletter!

During my journey I lived an

During my journey I lived an intense experience with a fantastic Terapist, and a person who was near me at that time have encouraged me with words of love that I will remember forever and keep within me like a treasure.

I will give to Cynthia the same words, like a little present, in this case referred to another great terapist, a brilliant human being.

"You deserve all the beauty and the splendor of Esther".

I too want young ones to sponge up this posture knowledge!

And Cynthia, I'm right there with you wishing airlines would consult Esther or I've tried to get my husband (works for an airline) to let me talk to someone in design whenever I hear him talk about cabin configuration projects. I would bring them the Gokhale book. I don't think they are under the same impact regulation constraints as car seats. We are spending so much time in them. If they ever sell standing class 'seats' on flights I will gladly choose that option some.

What an inspiring story that

What an inspiring story that gives a lot of insight into Cynthia’s positive outlook.  Cynthia, if you haven’t already written a book about your experience, please consider doing so.  I love to read stories about resourceful people who turn traumatic events into reasons to celebrate life.  It would also make a great screen play.

How wonderful that you have found Esther and the Gokhale Method to bring comfort to your physical challenges. Bravo to you both!

I agree that an

I agree that an autobiographical book by Cynthia would be very inspiring. She lives her life with great gusto and appreciation, her obvious challenges notwithstanding. I always leave our lessons with renewed vigor and gratitude for the good things that life brings. Most of us know we should feel that way - she helps makes it happen.

Esther, look at this 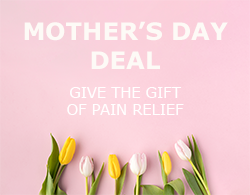